I am exceptionally fortunate to have been at Oxford since September of last year studying the Bachelor of Civil Law, supported by the BFSLA and the 2018 Scholarship. It has been nothing short of a whirlwind of brilliant and one-of-a-kind opportunities that I could have never gotten anywhere else and is the culmination of a lifelong dream for me. I am so grateful for the BFSLA’s support so that I have been able to flourish in the wonderful and unique Oxford academic environment. The best way to illustrate the sheer diversity of experiences that I encounter on a near daily basis is to provide a general sense of a typical week for me during semester.

It begins with a hard day of studying on Monday to prepare for the week ahead. Later that afternoon, I might have a tutorial with Professor William Swadling and two other students for my Restitution of Unjust Enrichment class, where one of us will read out an essay we have written for the tutorial which will then be the focus of discussion. In general, in keeping with the BFSLA Scholarship, I have focused in my studies on how the traditional debates in private law fields should be viewed in the insolvency context, and how the policies underlying the insolvency statutory scheme should mould developments in private law. For example, in class, I have presented an essay making an argument for an insolvency-based exception for ‘leapfrogging’ by creditors of third parties (who would normally be prohibited from recovering in unjust enrichment under the ‘direct provider’ rule).

Tuesday is an intense day of class with a seminar for Commercial Remedies, led by Professor Rob Stevens, in the morning (say, on the availability of gains-based remedies, such as account of profits, or on how the prohibition of penalty clauses in contract is used to prevent frustrating the pari passu scheme in insolvency), followed immediately by a seminar for Principles of Civil Procedure (for example, on the expensive use of experts in civil litigation, or on the uses and abuses of legal professional privilege by corporations). In the latter, I am particularly struck by the zero-tolerance policy adopted by English courts towards wasteful and delay-inducing litigants – an attitude which, if adopted in Australia, would hopefully lead to reduced legal expenses and delays in the course of litigation, and would have flow-on benefits for the efficient conduct of complex liquidations.

I spend Tuesday afternoon attending reading groups or talks offered by the Oxford law faculty, on anything from Islamic constitutionalism, to a discussion of the international legal effects of Brexit, to a lecture by Sir John Chilcot on the legality of the Iraq War at the Middle East Centre, or a talk hosted by Justice Edelman on Deeds of Company Arrangement. I sometimes have a tutorial in the late afternoon for Civil Procedure with Andrew Higgins (for example, proposing an adoption of the NSW Supreme Court Equity Division’s rules for discovery, or debating various mechanisms of ensuring party compliance in litigation). At other times, I would do something productive to break up the usual routine; such as editing for the Oxford University Commonwealth Law Journal, or judging the University’s Jessup Mooting team

Wednesday and Thursday would be more days of study, particularly writing essays for the following week, but I would take breaks to attend further talks put on by the university. These include book launches by private law theorists or to attend Q&A sessions by the Oxford Union starring guests such as the Prime Minister of Sri Lanka, Manny Pacquio, Russell Brand, Dame Diane Rigg, Jim Acosta, or former White House Legal Counsel Don McGahn. Alternately I might take a break from study to explore the libraries of the university, which on select days open up the centuries-old volumes for examination by the students. On Thursday nights, I might attend a debate hosted at the Oxford Union, or I might invite some fellow scholars to formal dinner at Lincoln College to discuss our studies in the beautiful medieval hall, followed by port in our Common Room. On one Thursday night at the beginning of this semester, I was fortunate to be invited to be part of a panel at Lincoln College discussing the impact of Brexit on international trade law, alongside a professor of European Union law, Dr Stefan Enchelmaier, and a member of the British House of Commons, the Hon. Lee Rowley – taking place two days after Parliament rejected Prime Minister May’s Backstop Agreement.

On Friday, I have my seminar for Restitution of Unjust Enrichment in the afternoon – sometimes with guest appearances from judges and academics across the common law and civilian legal world, for example debating the relative virtue of English and German approaches to restitutionary claims against third parties. In the evenings, I attend legal networking events; and every so often is a black-tie event held at Lincoln College, such as the annual Christmas Dinner or the Lord Crewe Dinner for scholarship holders of the college.

Saturday is another day of drafting essays and preparing notes, as is Sunday, but I break up the study with a walk down to the Port Meadows parkland bordering the north west of Oxford – right after there has been a snowfall it is absolutely stunning. On Sunday afternoon I attend fencing practice, training to be part of the Novice Varsity Team for the annual match against Cambridge. On weekend evenings, I might attend guest formal dinners at other colleges, or other similar events – such as Guy Fawkes Day fireworks, a Remembrance Day play, or Evensong in the Lincoln College Chapel.

Every so often I would plan a brief excursion to get out of Oxford – this upcoming week, for example, I am travelling to London to participate in the semi-finals (and hopefully grand-finals) of the 7KBW Commercial Law Moot, which is focused on the liability of banks for failing to detect schemes by dishonest directors to defraud creditors of their companies. At issue in the moot, based on the real-world case of Singularis Holdings Limited (in liquidation) v Daiwa Capital Markets Europe Limited [2018] EWCA Civ 84, is whether an insolvent company bringing an action for recovery against a bank on behalf of its creditors can be barred in bringing the claim by the company’s own illegal conduct from when it was run by a fraudulent director, which requires close examination of the public policy behind protection of creditors.

And, of course, between all that is a great deal of reading, studying, making notes and drafting essays to prepare for class, and our end-of-year exams – which despite being months away, feel like they’re approaching every day.

My experience here has been nothing short of phenomenal and for that, I am and will be forever grateful to the Banking and Financial Services Law Association. 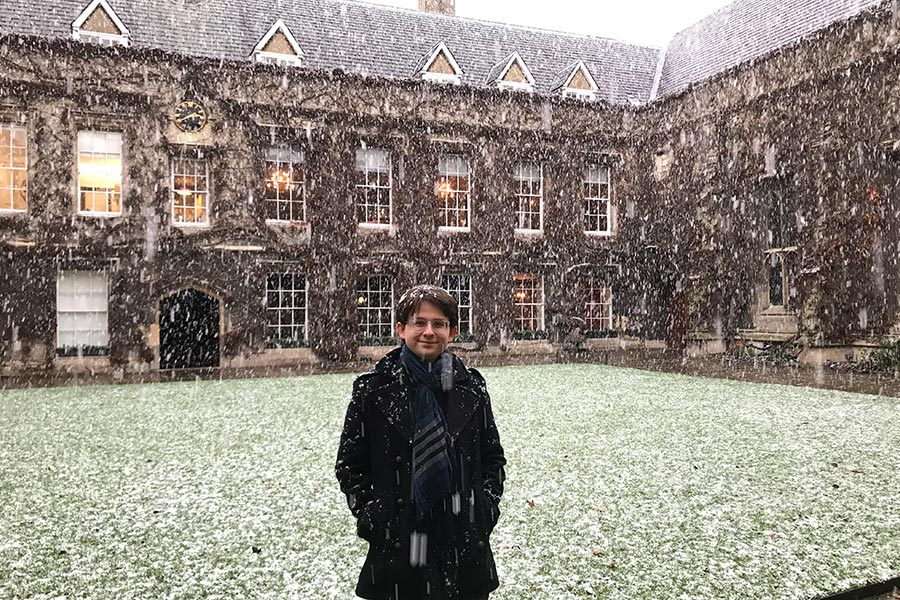 Lincoln College in the Snow 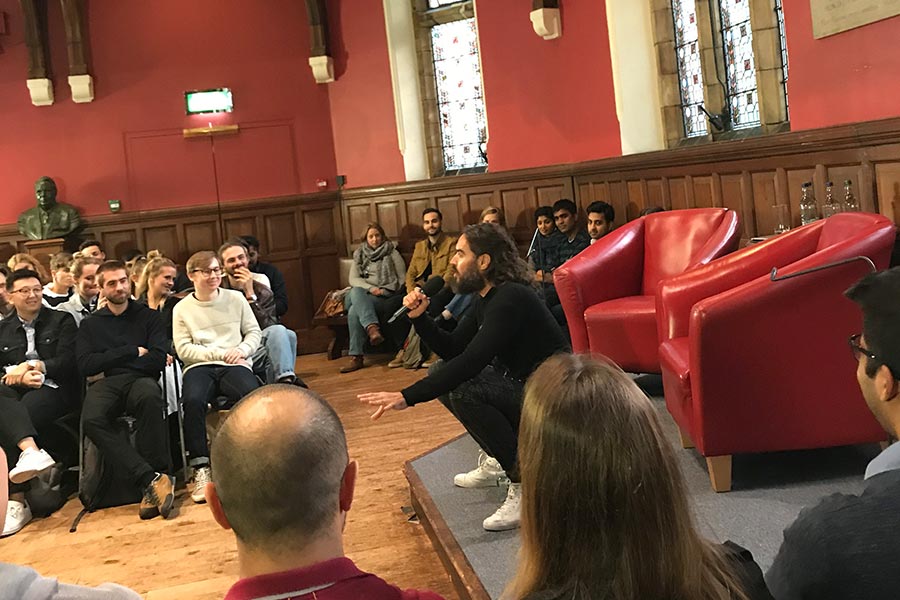 Russel Brand at the Oxford Union 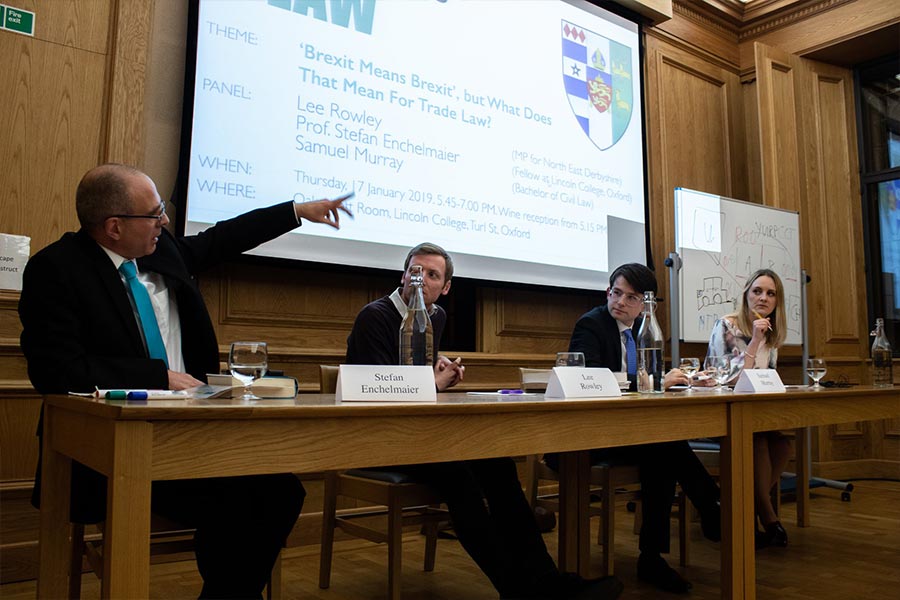 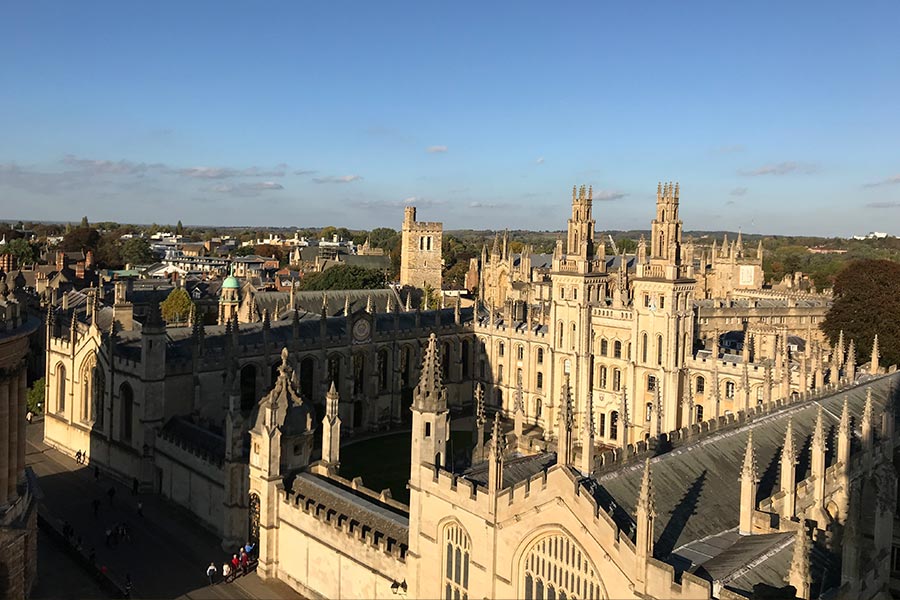 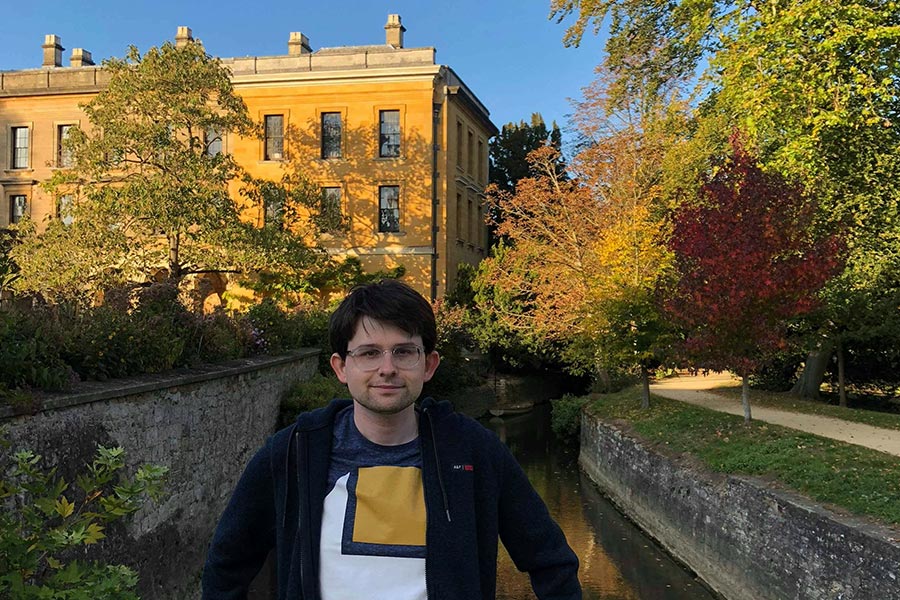 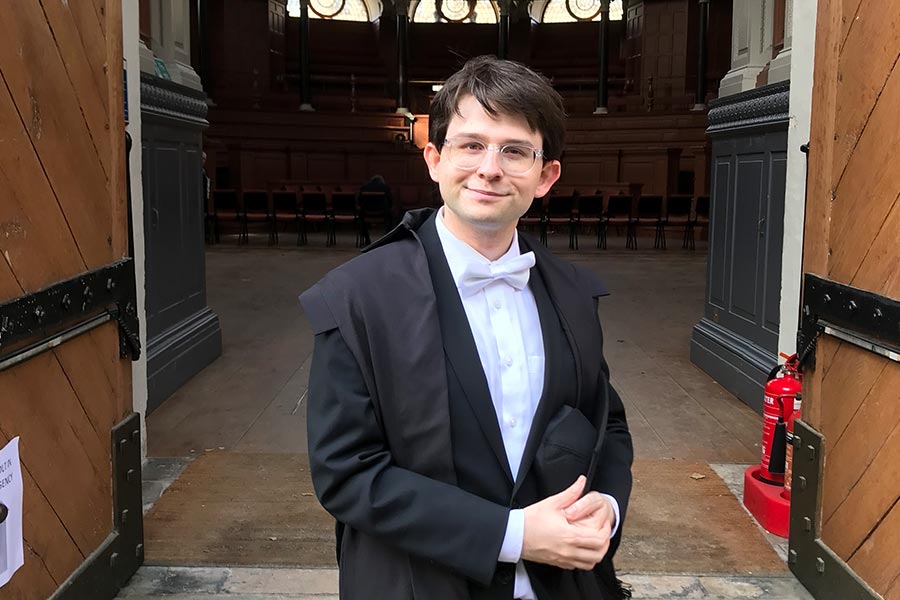 ‘Matriculation’ at the Sheldonian Theatre