Between my last update in February and the end of the Bachelor of Civil Law in early July, my day-to-day life has been a whirlwind of excitement, anxiety and the melancholy realisation that such a phenomenal experience enabled by the BFSLA Scholarship would be ending soon.

I have since finished both ‘Hilary Term’ (2nd semester) and ‘Trinity Term’ (3rd semester). Hilary Term was intense, filled with classes and tutorials designed both to enable the students to get across as much material as possible and develop their own unique engagement with the content. Whereas, almost the entirety of Trinity Term – despite having classes in the first few weeks – was devoted to exam study, both in terms of reviewing and updating one’s notes in preparation for the exams, then re-development and tweaking of one’s prepared ideas and analyses to apply in an exam environment. I can say with confidence that Trinity Term was both the most challenging and intellectually rigorous experiences of my career to date.

However, there was something incredible about the way that the disparate topics and material covered all fell into place, and how I could see the underlying principles of each subject interweave and intertwine to form a coherent understanding of commercial law. In particular, I approached each of my subjects from the perspective of my prior practice in insolvency, considering how modern day insolvency regimes interact with existing common law principles to produce sometimes consistent and sometimes disjointed results. I am grateful to the BFSLA for providing me the opportunity to generate and develop ideas about that interaction, which I fully intend to turn into further academic and professional works – with the ultimate aim of law reform – in the future.

In the Restitution of Unjust Enrichment subject, it was clear that principles insolvency law as a policy factor played a constant role in the development (and proposed development) of the evolving jurisprudence of ‘unjust enrichment’. In particular, I examined how concerns regarding the ‘leapfrogging’ of unsecured creditors undergird the ‘indirect provider’ rule, but also considered how those same concerns could justify the creation (through statute or judicial reasoning) of a new exception to said rule designed to maximise returns to creditors of an insolvent party. Moreover – predominately through being exposed to Professor Swadling’s views on proprietary remedies – it became clear how ‘proprietary’ responses to unjust enrichment, including rescission, rectification, and trusts can be used to subvert the insolvency regime by turning unsecured creditors with a claim in unjust enrichment (for example, for mistaken payment) into secured creditors.

In the Commercial Remedies subject, similar concerns underlie the possible use of specific performance or injunctions – in contrast to monetary remedies – to avoid the pari passu scheme for creditors. Similarly, one of the more novel ideas to come from the course was a purported justification for the ‘penalties’ jurisdiction in contract – that, without the court’s having the capacity to refuse to enforce penalties, contracting parties could protect themselves in cases of the other party’s insolvency by agreeing to extraordinary liquidated damages clauses triggering on insolvency. That of course raises the question as to what value the penalties jurisdiction serves where such concerns are adequately addressed by ipso facto clause legislative regime.

Finally, in the Principles of Civil Procedure subject, the overarching theme of the course – ie that justice has a ‘three-dimensional’ aspect to it, consisting of accuracy, cost and time, reflected in various jurisdiction’s ‘overriding’ objective – served as a useful anchor for consideration of how to improve the conduct of civil litigation by creditors, liquidators, administrators and receivers. In particular, I focused on how reforms to discovery, expert evidence, relief from sanctions and the costs shifting rules may be needed to substantially overhaul the civil justice systems of common law countries to ensure that litigation is conducted at proportionate expense to the value of the rights in dispute. Creditors’ rights in insolvency can best be protected where they, and the liquidators of insolvent companies, have cheap and quick access to judicial adjudication – conversely, where the prospective costs of litigation required by the current procedural requirements of the system outweigh the prospective gains, that creates a chilling effect on the capability of creditors to enforce their rights, and can in effect render the insolvency regime nugatory.

My ideas are still in a nascent state and require more consideration than can be detailed above but exposure to the course has broadened my view and has radically shifted my views on areas of law ranging from constructive trusts, to recovery of costs. That alone has justified embarking on this journey.

Outside of the world of commercial law, I took a class in International Law and Armed Conflict to round out my academic experience, by providing diverse insights from an entirely different system of law. Moreover, the opportunities that Oxford as an intellectual centre has offered are tremendous; since my last update, I was fortunate to see speeches given at the Oxford Union by Malcolm Turnbull, John Bolton and Ken Starr, and witness a debate over Prime Minister May’s Brexit Deal with Nigel Farage as one of the speakers. In Trinity Term I was also able to attend the 20th Anniversary Conference of the Civil Procedure Rules.

Even the conversations over dinner in Lincoln Hall with my fellow postgraduate students provided unprecedented opportunities for discussion of the latest developments in law, with people as diverse as a Ugandan corporate finance solicitor, a Turkish private law academic, an American policy advisor to the National Security Council and a Belarussian commercial arbitration lawyer. Of course, I have also enjoyed the wonderful social life outside of intellectual pursuits, including balls at Mansfield College and Keble College, fencing as part of the university’s beginner squad, ‘punting’ on the Cherwell River, and the Lincoln College Ceilidh (scottish dancing). That is all to say that Oxford has provided me with remarkable opportunities that I have done my best to take advantage of.

The last year has at times felt like I was balancing a dozen spinning plates. But I am a better lawyer for it, with rich memories and inspired understandings derived from hundreds of hours of research, discussion and study. This was my experience of the Bachelor of Civil Law at the University of Oxford; an experience made possible by the BFSLA, for which I am so very grateful. 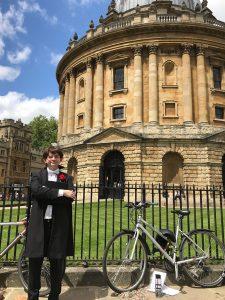 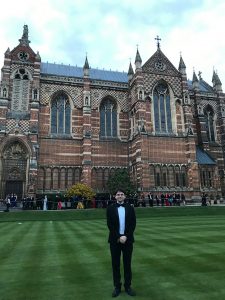 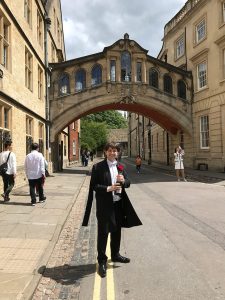 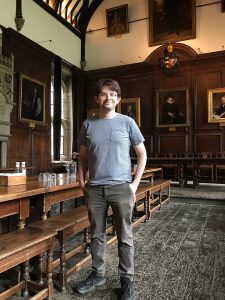