I wrote my last update in January from the busy New York Public Library, surrounded by people in the Rose Main Reading Room; I’m writing this one alone in my living room on the Upper West Side. Just a few short months and the world has changed dramatically.

Spring classes commenced in January after a milder-than-usual New York winter. I took a seminar in the Framework of Global Financial Regulation, a Trial Practice course, Negotiations workshop, and the United Nations Externship program.

The Global Financial Regulation seminar was fantastic, taught by Professor Vijay Tata, an incredibly knowledgeable professor who was formerly Chief Counsel in the Legal Vice Presidency at the World Bank. In this seminar, we surveyed the institutional and policy framework for global coordination of financial regulation and supervision, including critically examining substantive standards such as the Basel Core Principles for Effective Banking Supervision and the IOSCO (International Organization of Securities Commissions) Principles of Securities Regulation. The course was originally designed with some emphasis on the 2007 Global Financial Crisis, however, as a new financial crisis unfolded in real time before us, the professor adeptly incorporated into the course explanations and analysis of the responses to the COVID-19 crisis, such as the actions of the US Federal Reserve. This made for a particularly timely and fascinating course.

As I’ve said previously, the American law school curriculum has a broader and more practical focus than the typical Australian law school curriculum, which was one of the drawcards for me to study in the United States. My classes in Trial Practice and Negotiations are great examples of classes with a strong practical focus. My Trial Practice class was taught by two partners from Paul Weiss, one of the leading litigation firms in New York, and our final assessment was a mock trial where I conducted a direct examination and a cross-examination, which was great fun, and excellent on-my-feet training as an advocate.

The Negotiations workshop was equally practical, with the class participating in simulated negotiation exercises nearly every week. This class made me realise how pervasive negotiations are in our professional and personal lives, and yet how little I knew about negotiation techniques before taking the class. Understanding how to conduct a good negotiation is particularly important for settlement negotiations as a litigator and for achieving any number of negotiated outcomes as a regulator. One of the more important lessons I took away from the class is about learning to look for value-creation opportunities in any negotiation.

Finally, I participated in an externship at the United Nations, where I was placed in the Investigations Division in the Office of Internal Oversight Services. The Investigations Division conducts investigations into reports of possible misconduct by United Nations staff or contractors to guide the Secretary-General on appropriate accountability action to be taken, including misconduct relating to financial fraud, harassment, and corruption. It was great to see different investigative techniques in practice and to compare and contrast them to practices I had learned in my work at the Australian Securities and Investments Commission. It was also a privilege to work for an organisation with such a noble purpose.

Outside of classes, I continued to participate in the Law Revue (a parody musical performance put on by Columbia Law Students each semester), as well as being selected for the Columbia Law School Deans’ Cup basketball team. Deans’ Cup is an annual charity basketball game between the law schools of Columbia University and New York University, and is the single largest law school event in the United States. I also planned to travel to Tunisia in Spring Break to undertake pro bono work with a group of other students relating to Tunisia’s new Constitution. However, devastatingly, just prior to Spring Break, the coronavirus pandemic hit New York City, and none of these events came to fruition.

For the second half of Spring Semester, all of our classes and externships were conducted virtually via zoom meetings, and all social and sports events were cancelled. Many of my international friends were compelled to leave New York and head back to their respective homes, as the city found itself increasingly at the epicentre of the global pandemic. I too contemplated returning home to Australia, but decided to stay in New York at least until the completion of my studies, with a mid-semester international move and 3am Australian time classes not greatly appealing to me.

Although it was not the way I had hoped to finish the semester, I feel fortunate that Columbia was able to adapt to online learning relatively smoothly and allow us to complete the LL.M. program in the usual timeframe. I also feel fortunate to have filled the beginning of the Spring Term with plenty of wonderful experiences: I saw To Kill a Mockingbird on Broadway and the play Medea featuring Australia’s Rose Byrne, which were both outstanding; I took a weekend trip down to Miami where I saw a Miami Heat basketball game; and instead of the planned Tunisia trip, I managed to get away to Virginia for a hiking trip.

Our online classes culminated in a virtual graduation ceremony, held last week, being the first in Columbia’s history. Joe Biden delivered a rousing keynote address, although it was bittersweet knowing how incredible it would have been to have been gathered together with all of my classmates to hear it in person. As I’m still here in New York, I was at least able to head over to the campus to take some graduation photos in my robes (see below). I was honoured to graduate as a James Kent Scholar, being the highest academic honours awarded at Columbia Law School, as well as receiving the Whitney North Seymour Medal for the most promising trial advocate, and a Dean’s Honor for my United Nations externship.

Next week I will begin studying for the New York bar exam, which I intend to sit in early September, before returning to work at the Australian Securities and Investments Commission in Sydney.

I would like to again express my immense gratitude to the BFSLA for supporting me to undertake this study. Despite the interruption of the pandemic, my Columbia LL.M. experience has been incredibly enriching both personally and professionally, and I have no doubt that it will stand me in good stead to achieve my future career goals as a litigator and regulator in financial services. 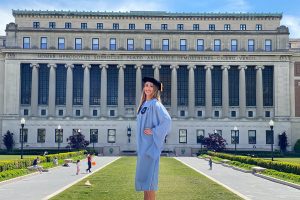 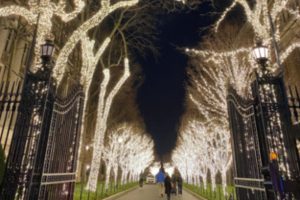 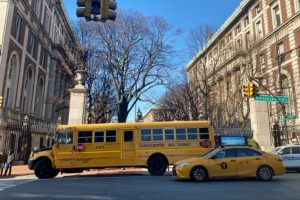 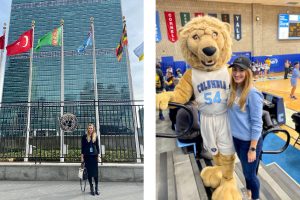 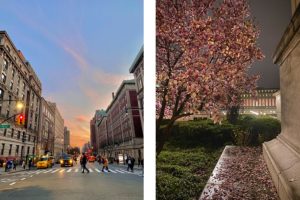 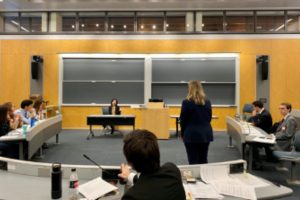 Participating in a mock trial competition (I am behind the camera)