I wrote my last update in late January 2020 from my accommodation in Magdalen College, blissfully unaware of how much my life was to change over the next six months. Notwithstanding some of the difficulties of Covid-19, I had a unique experience which I will treasure for a long time, and I cannot thank the BFSLA enough for supporting my studies at the University of Oxford.

Hilary Term (the second of the three terms) started in late January. This was the busiest term for me as it contained the most classes – in particular, it contained the majority of my tutorials. BCL tutorials were one of the main reasons I wanted to study the BCL. Unlike the tutorials in my undergraduate studies, BCL tutorials consist of a Professor and no more than three or four students. My tutorials provided an unparalleled opportunity to moot ideas and theories – and (of course) to have them shot down by some of the most respected academics in the field! I benefited enormously from my tutorials. They taught me to defend my ideas on the run, to think outside the box, and to appreciate the connections between seemingly disparate areas of law.

I continued as one of the convenors of the Obligations Discussion Group (ODG). In Hilary Term we hosted a number of leading academics, including Sandy Steel (Oxford), Nick McBride (Cambridge), Ori Herstein (KCL and Hebrew University of Jerusalem), Paul Davies (University College London), and Eric Descheemaeker (University of Melbourne). One of the (many) highlights of my year was in late Hilary Term, when Jordan English and I presented two chapters from our forthcoming book, The Law of Tracing. Presenting our research to about 30 Oxford dons and students was a surreal experience, to say the least. We received generous words of encouragement and much constructive feedback. I am sure that the book will benefit enormously from it.

Although Hilary Term was my busiest term, I did my best to participate in extra-curricular activities. I attended a lecture by Lord Briggs and participated in an Oxford-Edinburgh Private Law Workshop. And I continued to attend college dinners and guest dinners with friends.

College life during the pandemic

Everything changed in late March. Shops, restaurants, and libraries shut. The college dining halls stopped serving meals. And the United Kingdom went into lockdown. The first two months brought the most serious restrictions: I was confined to my room in college and could only leave my accommodation for specified reasons. We were allowed to exercise for an hour every day, but only with people from our own household. The restrictions were later relaxed a little, so that we were permitted to exercise with one person not from our own household. Unsurprisingly, this led to many lunchtime walks with friends I hadn’t seen in months. About a month later, we were finally able to meet in groups of six outdoors, which resulted in many dinners in the park.

That may sound bleak, but there are many worse places to be in lockdown than Oxford. In many ways, I have been extremely fortunate. I also found that the restrictions brought people closer together than before – just in a different way. Group study sessions in the library turned into study sessions by video-call. Friday night dinners became Friday night Zoom drinks. Eating in the dining hall became cooking in my kitchen. Evenings at the cinema turned into Zoom movie nights. And the College MCR (the graduate community) made every effort to keep college life continuing as normal. They set up a “virtual common room”, and they organised virtual trivia, virtual movie nights, virtual study sessions, virtual craft classes, and virtual yoga. Everyone looked out for each other, and we made sure that no one was left isolated or alone.

Luckily, when the restrictions were introduced, I only had one or two classes left for each of my courses. These took place online, and although it is difficult to emulate the unique experience that is an Oxford BCL seminar, they came very close. And because tutorials only had four or five participants, the online experience was almost the same as the real thing. The most significant change was my assessment: for the first time in its 1000-year history, the University of Oxford ran exams online. This had its benefits and its drawbacks. On the one hand, we missed out on the experience of sitting exams in the beautiful Examination Schools building. But on the other, we avoided having to wear sub fusc – traditional academic dress involving a collared shirt, bowtie, and robes – while sitting our exams!

Much to my delight, the UK started coming out of lockdown a few days after my exams finished. The pubs, restaurants, and tourist attractions all slowly reopened. This meant that I had a bit of time after my exams to try some of the things I had been unable to do because of the pandemic: I punted on the Cherwell River with friends, I played croquet on the Magdalen College grounds, and I took a day trip to Bath. But the thing which I had missed the most by far during lockdown was having dinner and drinks with friends. And in August, the government introduced a scheme where all dine-in meals at restaurants were 50% off on Monday/Tuesday/Wednesday. We made the most of it!

When I first came to Oxford, it was difficult to know what to expect. From where I am sitting now, I can honestly say that it exceeded expectations in every possible way. I made lifelong friends from all over the world; I learned from some of the leading academics in the common law world; and I took advantage of many of the opportunities that come with living in such a beautiful city for a year. I count myself incredibly lucky to have had the opportunity to study in Oxford, and I owe a great debt to the BFSLA for making all of it possible. 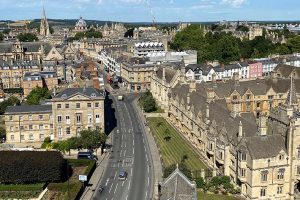 The Oxford High Street as seen from the top of the Magdalen Tower. 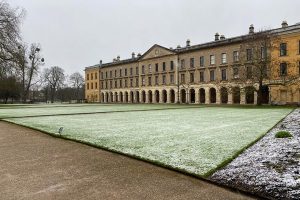 Magdalen College on a day in late February when it snowed. 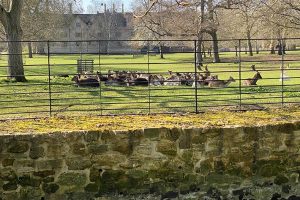 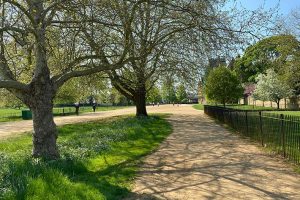 One of the walking tracks through Christchurch Meadows.